A Tech Conference at a Food Truck Park?!

Last week I had the pleasure of speaking at PyBay Food Truck Edition in San Francisco. It wasn't the first time I'd presented in a tent, but it was the first time doing so in a park surrounded by food trucks! 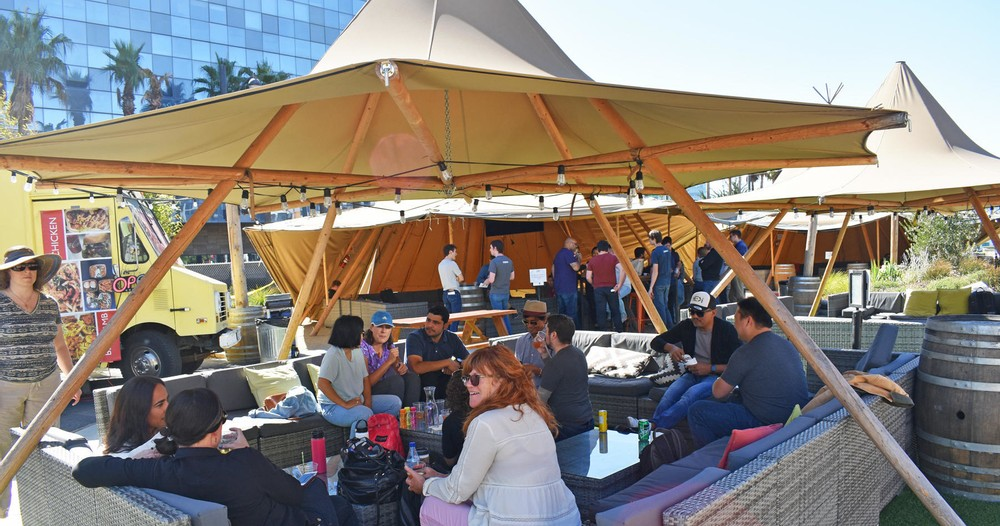 It was a great event! The organizers and an army of volunteers took care of everything so attendees, speakers, and sponsors could enjoy the time of learning, networking, and eating!

My presentation on building event-driven microservices with Python and Kafka was well-received, with some great follow-up questions.

Another cool thing about this event was that we were also sponsors, which gave my co-worker Danica Fine and me opportunities to chat with dozens of developers and data engineers and hand out some cool swag! 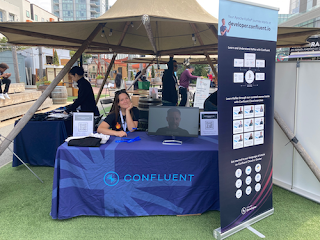 Sadly, I couldn't attend sessions until near the end, when visitors to our table began to slow down. At that point was able to catch an excellent talk on the observer pattern by Aly Sivji.
I was also hoping to catch the testing panel that Andy Knight, Brian Okken, and others were holding, but I had to miss it. At least I was able to get in on a selfie with Andy! 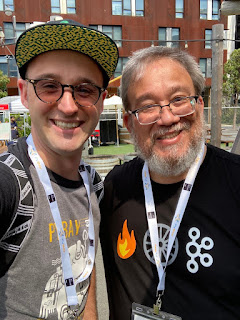 The weather was perfect for an outdoor event in San Francisco. The people, as seems to be the norm in the Python community, were friendly and eager to learn and to help others learn. Overall, it was a great event, and while eleven hours on my feet was a bit rough, I am so grateful for the opportunity and am already looking forward to PyBay 2023!

The Joy of Community, an Anecdote

I am very grateful for the amazing people that I've met in the Apache Kafka community. Whether online or in person, my interactions with others in this community have always been rewarding. One of the people that I met through this community is Robert Zych. I "met" Robert at an online Kafka Meetup that we were both attending. Robert was one of the first to turn on his camera and get involved in the discussion. He was very interested in learning more about Kafka, and others in the community, such as Neil Buesing, Matthias Sax, and Anna McDonald, to name a few, were eager to help him.
As time went on, I was able to get to know Robert better. We even worked together on an interesting side project that he came up with. And Robert became more involved in the community. He went on to write a guest blog post for the Confluent blog, and was even selected as a Confluent Community Catalyst! Then a while back, Robert asked me for my mailing address. About a week later, this lovely tie showed up in the mail. 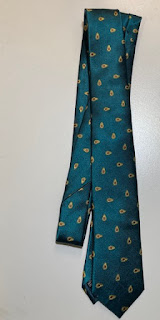 Now, I don't wear ties very often, but I will probably make an exception for this one. Some of you might notice the avocado pattern on this tie, and might tie it to the fact that I am a developer advocate at Confluent. But that's only because you don't know the rest of the story.
Frequently, at Kafka meetups, we'll start out by asking people where they are connecting from. In the before times, meetups were location-based, but now people join from all over the world. (I like to attend meetups from Australia, so I can find out how tomorrow is looking.) At one of these events, Robert mentioned that he is in Sacramento, California. I grew up in Sacramento and still have family there, so when I mentioned to Robert that I was going to attend a nephew's wedding, he invited me to lunch on the afternoon before the event. He lived nearby the wedding venue, so it worked out great.
We had a great time meeting in person and catching up. Now I was already dressed for the wedding in slacks and a white dress shirt. No tie, because, well, I don't wear ties. So, I was being very careful, even ordering something that I knew was not likely to drip and make a mess of my white shirt. However, Robert had ordered some delicious-looking guacamole and chips, and I just had to try some.
Of course, on my very first attempt, a blob of said delicious-looking guac fell right on my shirt! There was a small, but very noticeable green stain that I couldn't get rid of, and there was only a couple of hours until the wedding. Fortunately the stain was right in the center of the shirt, where a tie would normally go. So, Robert invited me over to his house, where I was able to not only meet his lovely family, but borrow a tie that perfectly covered the guacamole stain! When I received the package in the mail from Robert, and saw the pattern of the tie, I almost fell over laughing. The double meaning was obvious to me, and now it is to you too, because now you know... the rest of the story.


* My sincere apologies to the memory of Paul Harvey.
Posted by Dave Klein at 4:22 PM 0 comments